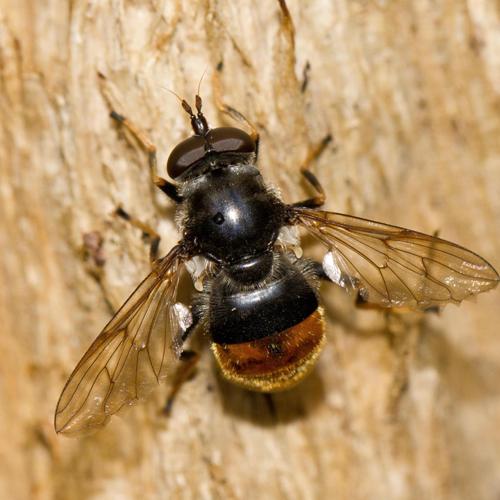 Return of the fly - The hoverfly

Recently thousands of rare hoverfly larvae that have been captive bred were released in Cairngorms in Scotland.

The last sighting of wild pine hoverfly in the UK was over eight years ago.
In the UK the pine hoverfly are only known to inhabit one small forest in the Cairngorms.

The main reason for the hoverfly’s decline is a lack of suitable habitat for its larvae, which develop and feed in the water that collects in rot-holes in Scots pine stumps. The trouble is that they prefer stumps that are more than 40cm wide – and there are just not enough of that size in Scotland’s forests today.
Like many other insects, the pine hoverflies play an important role in maintaining healthy ecosystems, but are sadly often overlooked until it is too late.
The Highland Wildlife Park has been captive breeding the flies since 2016 and this has released thousands of larvae at three woodland sites.
The breeding programme forms part of the Royal Zoological Society of Scotland (RZSS) and the RSPB-led Rare Invertebrates in the Cairngorms project.

RZSS owns the Highland Wildlife Park at Kincraig near Aviemore.

In the wild, the larvae live in small holes that have rotted into old pine trees. There, they feed on a "nutritious soup" of bacteria. To make the soup in captivity, keepers mix pine wood chippings from the flies' natural habitat with rain water.
Scientists have been working on creating the essential ‘soup’ by using pine sawdust, pine chippings and pine bark in other types of tree stumps.
In areas scientists are trying to introduce the pine hoverfly, they have noticed other species of fly are successfully using and benefitting from the ‘soup’.

Why are hoverflies important?
They eat the aphids (greenfly, blackfly etc.) that eat and destroy crops, flowers, plants and vegetation. The aphids have also been known to transmit and therefore spread plant viruses.

What do pine hoverflies look like?
Pine hoverflies could be mistaken for wasps or bees as they have a loud buzz or hum. They do not bite or sting humans.