Animals used for Entertainment.
With the recent video that is doing the rounds on social media of what appears to be an animal mistreated for the sake of human entertainment.

I felt I should make a comment and speak out on my view of animals used for entertainment.
Animals and humans alike have been entertaining everyone for years and when things go well it can be entertaining.

When it goes wrong both humans and animals can get hurt. However the main difference between the humans and animals involved is the degree of choice. Yes the entertainment business ensures the humans sign all sorts of disclaimers and paperwork before they do anything in entertainment but animals do not get to sign anything. Does this mean the get no choice? Well that all depends on who their humans are. Are their humans putting the animal's health and welfare before profit

You may say that humans get the choice to say no and animals do not get the chance to say no,  well that is not exactly true as animals can and do say no by giving clear signs and signals to their humans. Now when the humans are listening to the animals everything should be fine as the human should step in and speak up for the animal. How many times have we read about an animal in the entertainment industry that has suddenly attacked a human for no reason? Well that is more tabloid frenzy than anything, a lot of reporters don't let the facts get in the way of a good story. Lets face it the headline of "Animal attacks human on set of ... Movie" sells more papers than "Human forces animal to do something until the animal gets frustrated and physically warns/injures a human they do not want to do something".

Unfortunately not all humans listen to the animals and that is where I have a problem. In this day of special effects and CGI there should be no reason for any animal to be forced into a position of either striking out in frustration/fear or even worse, getting hurt/killed.

The worse thing about any animal being mistreated or forced to do something in the entertainment world is that not only is the human doing wrong but the silent witnesses we do not realise are there are just as wrong. The humans behind the scenes, the humans operating the cameras, the lights etc. do they all work blindfolded?

In law animals are 'property' which is saying they are inanimate objects lacking perception and unfortunately humans forget animals are sentient beings. Animals may not speak as in the human definition but they do speak out using body language and signals.

So what can you do? What can anyone do? I could list a whole load of suggestions but would they cover every situation? If you see animal abuse in entertainment, report it, stop it. Who do you report it to? Tell the human that is responsible for the animal's welfare, tell another work colleague, tell your country's animal welfare organisation. First and foremost speak out, because if you don't then you may as well be the human doing harm to the animal.

Animals do not have a voice - BE THEIR VOICE AND SPEAK OUT !

With kind permission from Foul Mouthed Fido I have added one of his cartoons as he edited it especially for my website - he isn't called foul mouthed for nothing :) 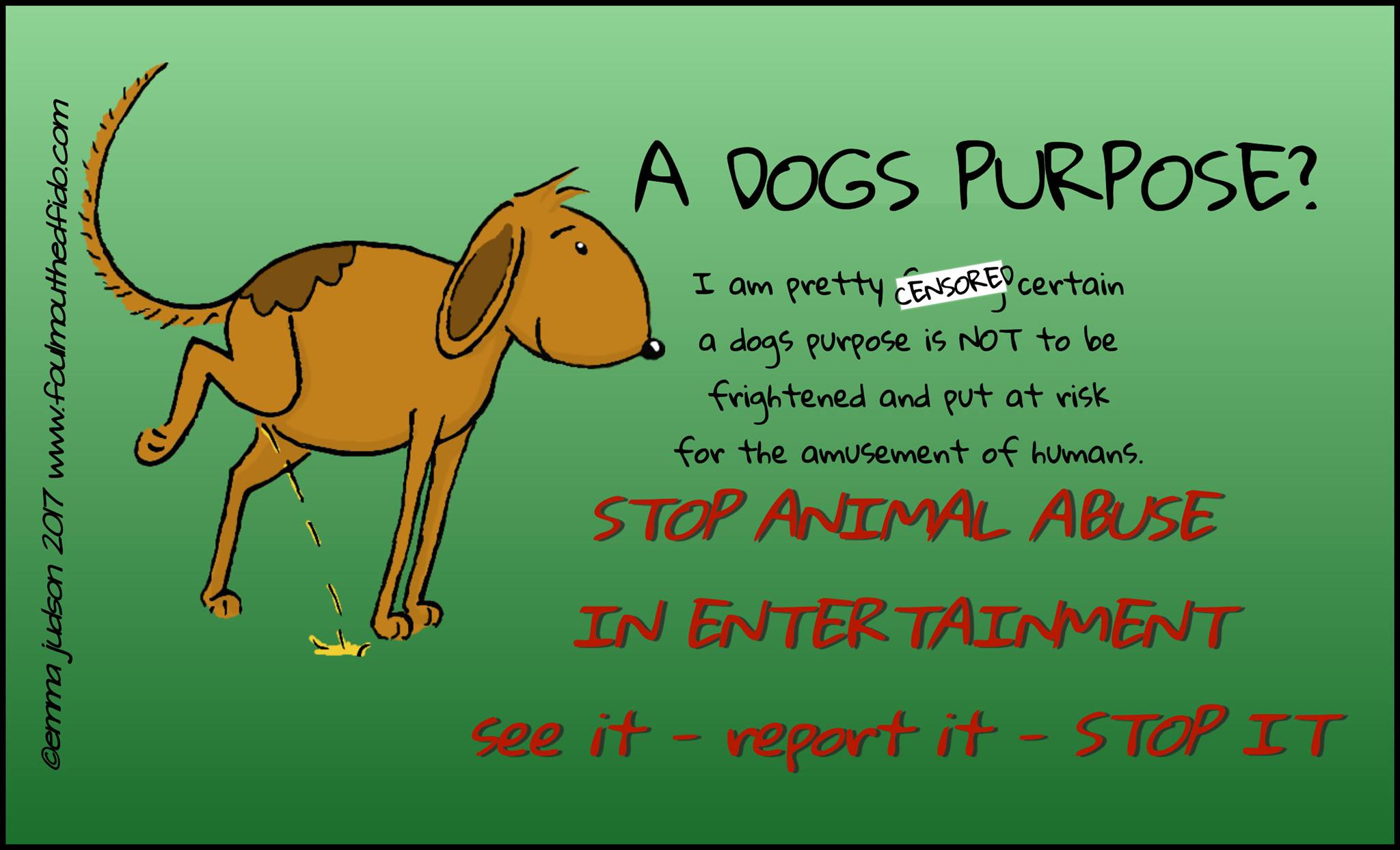