On the 15th of July I went to Wetherby for a sighthound meet up.

I was excited to got here as there were quite a few greyhounds expected to be there.

First of all the journey there was, well, what can I say..interesting?
As my human’s car is past it’s prime and not really up to a long journey we jumped into Daragh & Coco’s car. Their human was *ahem* eager to get there, so the journey did not take that long.

When we arrived it was quite warm so we all had a quick walk around the stall there and looked for somewhere to sit.

Now I am not very used to going to meetings and events like this. So my human had packed to normal essentials of treats, blanket, treats, bowl, my hat and more treats.
Pretty soon other pals arrived and began to sat with us.
Well I say sat, that gives an impression of blanket and sitting around.
The only way I can describe the following is that a mini city of tents, gazebos and fancy umbrellas started popping up around the field.

Once the shelters had all been set up the humans brought out every conceivable way to keep us all cool on what was turning out to be a very hot day.

There were cooling mats,
battery operated fans, cooling coats and at one point a human was walking around the field with a enormous watering can watering all of us houndies. Although there were one or two houndies not very impressed with their efforts.

When I was walking around the field with my human they spotted a paddling pool set up under a gazebo for houndies to lie in to keep cool.
My human thought it would be a great idea to get me to go in it. After much protesting and nifty paw work of avoiding the pool, my human pretty much led me by my harness through it. As I was unable to avoid it I did the only thing I could do in that moment.
At lightning speed I sped through the water, pausing only to kick out with my back paws and completely drench my human BOL!
My human got the hint and stopped trying to get me in the pool and we wandered around the other stalls.

I really enjoyed the day apart from being relatively close to the fun dog show ring...and missing it completely !!
One of these days I will win a rosette.

I enjoyed a pawsome lunch which had been prepared by Strawberry and Major’s human. Followed by loads of treats.
There was a rumour going around that the humans were limited to bread and water for their lunch BOL!

Greyt Images was there doing their puparazzi thing and got some great pictures of the day, not to mention some very
superb pictures of me.

It was a brilliant day for all who attended.

It was only after I got back home that I realised so many pals I have met on social
media were not only there too, but they were sitting pretty near me.
How embarrassing a field full of sighthounds that didn’t spot houndies nearby.
Oh well there is always next time. 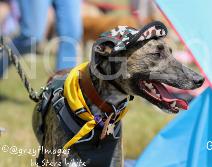 Nose bump to you