Hello Furriends!
We hope everypawdy has had a good Summer (or Winter, depending on where you live).

Yoda has not had a very good Summer. His summer home has become the kitchen cabinets. Yoda has become very elusive as of late.

He was diagnosed with hyperthyroidism last month, and now has to be given a pill twice a day. He does NOT like that. The cabinet he used to hide in had an opening on the side, so he could get in and out easily. But Momma could get a hold of him from there. So he relocated to a different cabinet area. But Momma was worried he would get trapped in there. She ended up having to tape the doors shut.

He then relocated again, this time to under the couch. After a few days of not coming out, Momma used her evil squirt bottle to evict him from there. He, then, moved back into his original cabinet. Momma was temporarily satisfied with that arrangement….until he NEVER came out!

One day Momma came across a box that was too big to pack anything in. She was trying to break it down, when Yoda jumped out of the cabinet, off the counter, and into the box. He has been residing in that box ever since. Momma says that it’s better than the cabinet. She’s been able to give him his medicine more regularly like she is supposed to. So Yoda’s new home is a big box in the middle of the kitchen floor.

Yoda is going to have to take this medication for the rest of his life. It sure is going to be an interesting next undetermined number of years.

CheezIt, BoyCat, & Butter Bean
(and Yoda, who still remains in the box) 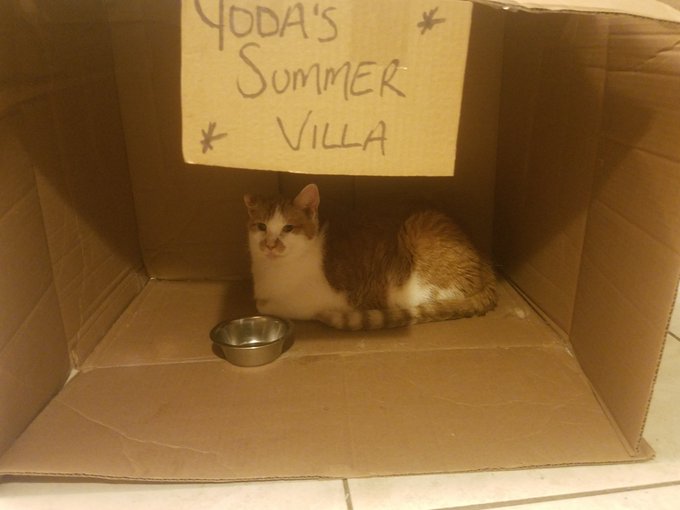