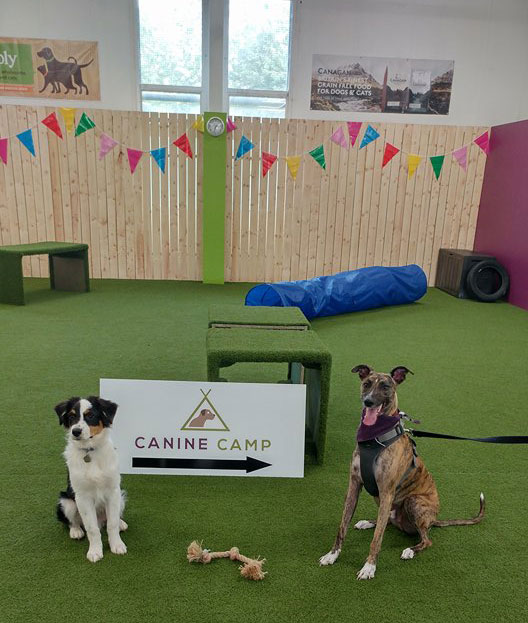 I visited Canine Camp Ltd to see what it was all about.
First of all my human let the side down by getting lost. You just can’t get the staff these days, how embarrassing. We eventually arrived. There are plenty of spaces for parking, so there was no problem there…if you ignore my human’s attempt at parking BOL !

We entered into the small reception hall and were greeted by one of the human staff, Emma, who booking me in as a VIP visitor.

Entering through a gate I was met by the other two human staff there called Cheryl and Georgie. I was pleased to see them but soon saw the one I was here to see and interview – Monty, who  is an Australian Shepherd, was waiting in the play pen area for me and I went over to talk to him.

I asked him about Canine Camp and how it came about.
He explained that his human, Cheryl,  had always wanted to set up a doggy daycare as their house was a holiday home for dogs when she was growing up so was used to seeing and interacting with all types of dogs and knew the work involved in caring for them.
They looked at setting up Canine Camp in August 2016 and after researching sites, getting through all of the council rules and other things they needed - they opened their doors on 17th June 2017.  They can cater for up to 30 dogs at the same time with a staff to dog ratio of not more than 1 staff member to 5 dogs to ensure everyone’s needs are catered for properly.
There are plans to expand with training, grooming and are hoping to have more Canine Camps in other areas.

Monty told me to have a look around to see what I thought while he went to get his staff to make my human a coffee.

Inside there are three main areas that have a nice white picket type fence about 3 feet tall. Unfortunately the fencing has been put close together so I couldn’t get my pointy nose in between the fencing.  This is good to stop any small dogs squeezing through but no good for any games of bitey face through the fence.

I went into the peaceful pen area where there was a nice selection of beds to choose from and a good selection of toys scattered around. The floor in there is similar to the type at a veterinary practice and yes it is easy clean as I tested it out myself, much to the embarrassment of my human. That will teach them to get lost on the way to a meeting BOL !

The playful pen where I met Monty has that fake grass on it so zoomies can be achieved without sliding around too much and there were more toys scattered around. There are a few obstacles to explore and climb on or under.

The outside area has a huge fence that even a very determined dog would have trouble getting over it as it is about 10 feet tall.

There are several bolted gates along the fencing for staff to enter or exit quickly if needed. I quite like the feeling of being in an indoor park as there are no cages or metal fencing and it feels well lit and very relaxing. The human staff members are very attentive and ready to play and give cuddles if you want.

I asked Monty if it was okay to have a picture taken with him before I left and he agreed as long as we made it as difficult as possible for the humans to get us pointed in the same direction at the same time. So we took turns moving and turning our heads just as the photograph was being taken. So after several failed photographs we let the human take the photo.

If you are looking for some pawsome daycare to go to as they are perfectly located if your human works nearby as they can drop you off on the way to work and pick you up on the way home or if you just want a few hours rest from your humans then this is a great place to consider.

To find out more about Canine Camp Ltd visit their website www.caninecamp.co.uk