Hello all,
I am now 15 months old. As you are aware I start my General Purpose Police Dog initial course at the beginning of January 2020.

Of the six pups earmarked for the January course there are three of us left, and one of them is perhaps borderline, that said, the canine development officer thinks he will make it. 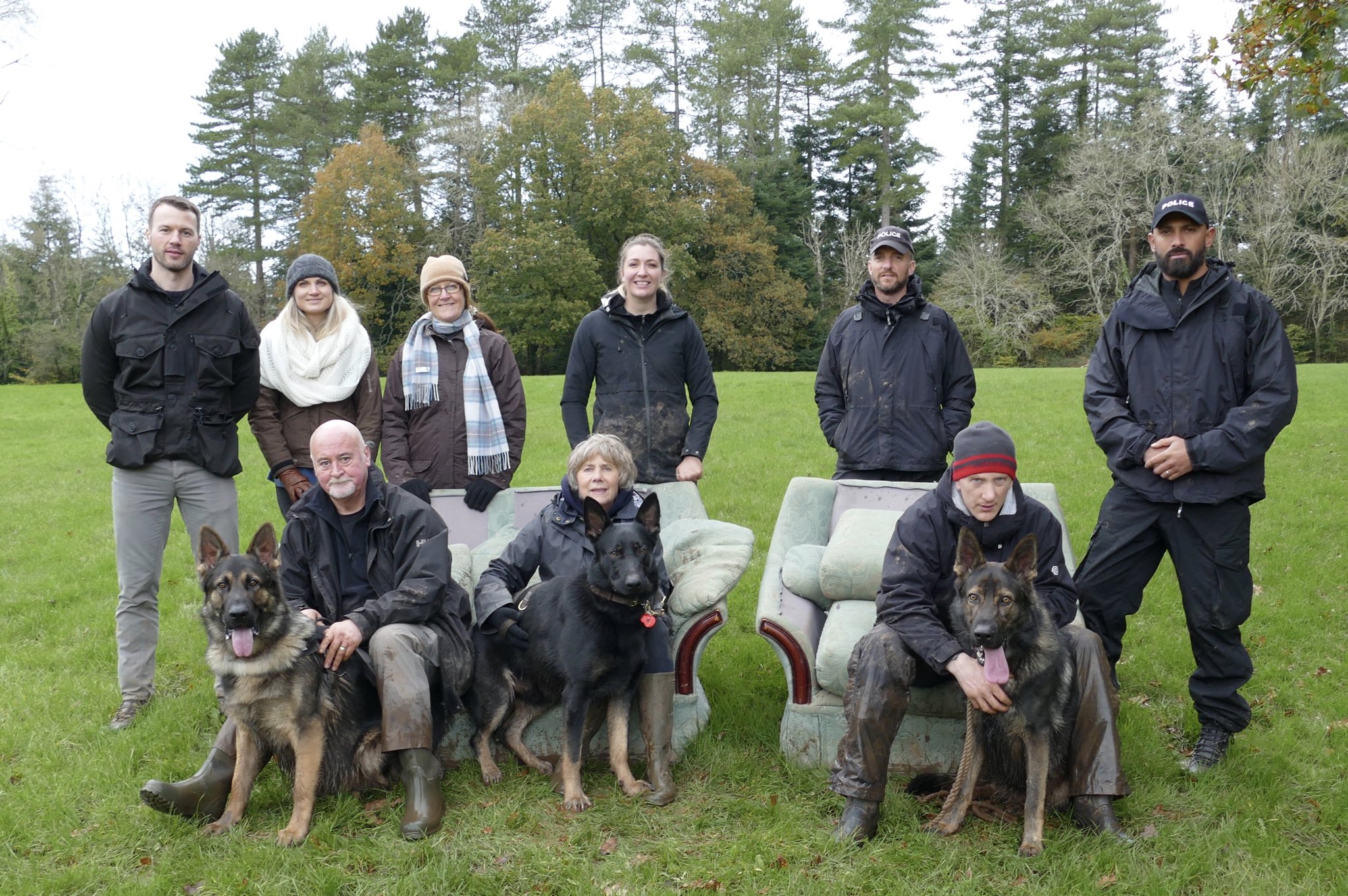 Since my last blog my brother Arnie and I have been brought forward to go to our handlers early for ‘operational reasons’. Alison and Stew were told they would have me until Christmas, then it was the beginning of November and finally I was handed over on the 19th November.

It was hard to leave Alison and Stew. It’s going to be a difficult time for all of us. Stew said I was ready to go and work.

My handler is called Ed. I met him at one of our training sessions. Ed came to my house to go for a couple walks with Stew and I.

Here are Ed and I playing my favourite game of ‘tug’. 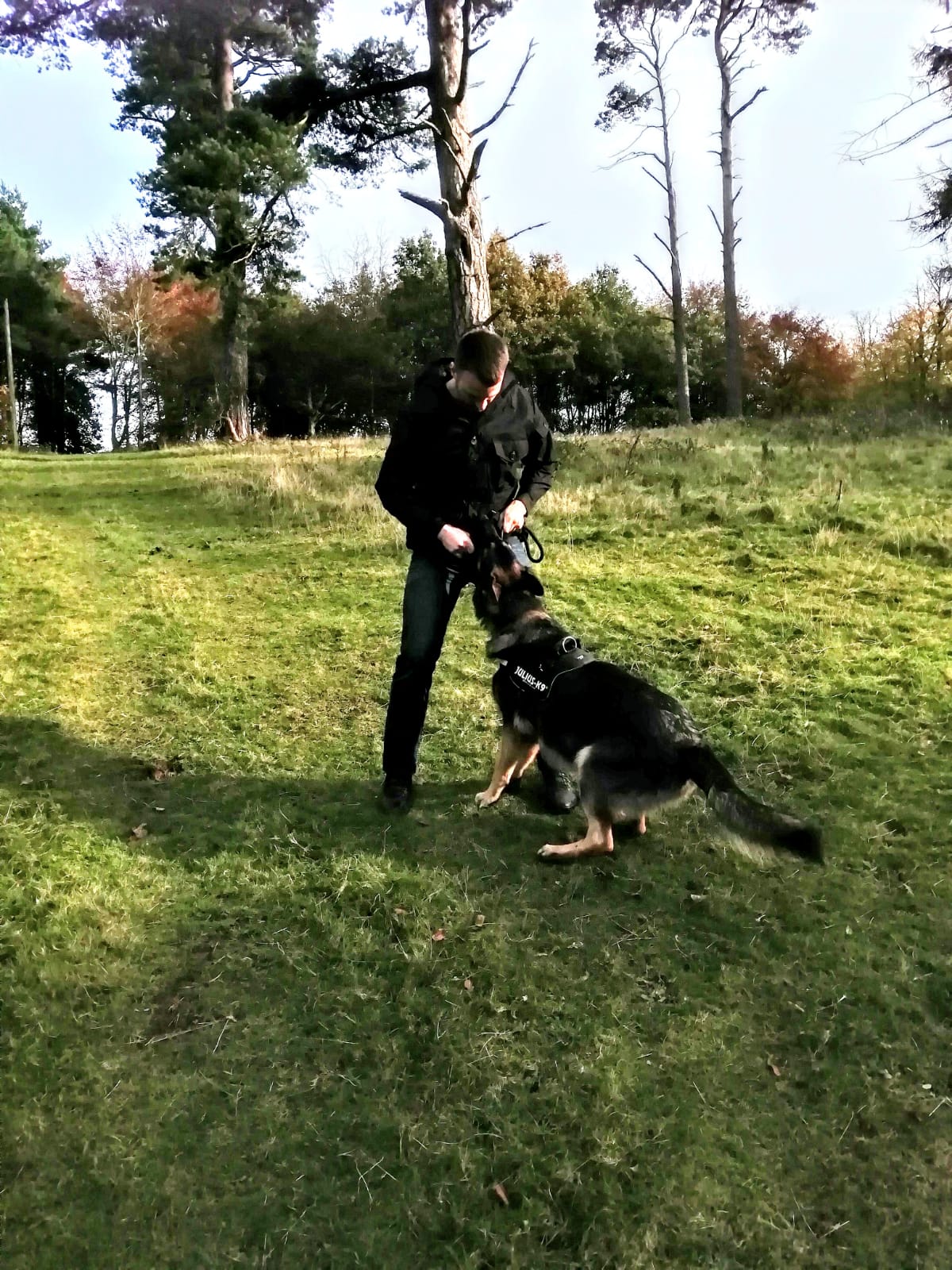 Stew said we have been well matched. Ed is a new handler and is very keen, as I am, I am sure we will make a great dog team. We will be based in Plymouth. Oddly, Alison and Stew think Ed looks a bit like their son Jamie. All three handlers are new, so we will all be learning together.

I went to my last Remembrance Day parade with Stew, I was standing next to the bugler. When he played I just looked at him.

A newspaper photographer took a photo of me sitting on my namesake Jamie’s bench at the war memorial. 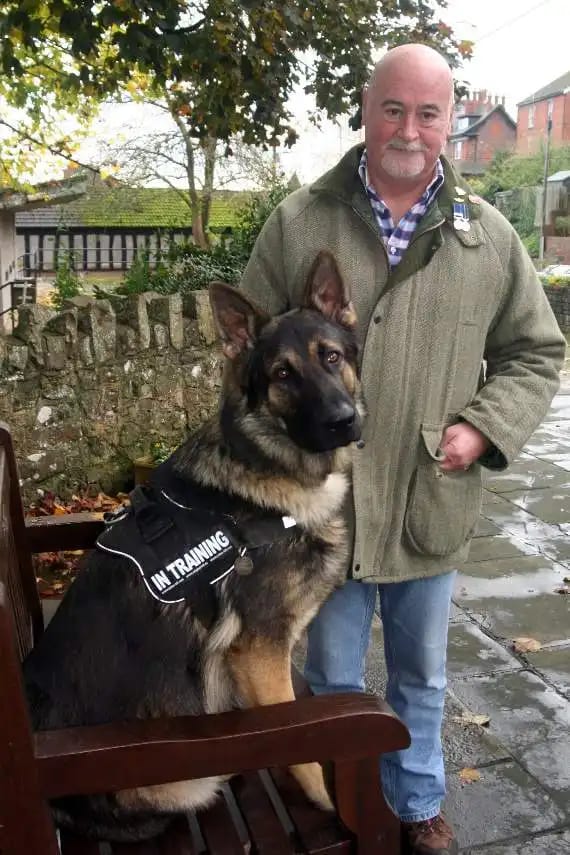 We had our last training session in mid-November, it was a very muddy affair – but I enjoyed it. My new handler Ed and his wife were there. They have a retired female Police dog called Sam. Sam is nine years old, they hope we will be good pals.

We finalised what we have learned, long twisting tracks, criminal work, finding and barking at someone hiding and of course chase and detain a criminal. The finding someone was made fun by the instructor hiding up a tree – no, don’t worry I wasn’t barking up the wrong tree!

When I had chased down and had a bite on the criminal, the instructor tried to get me off by trying to swing round, I wasn’t having any of that! When he eventually got the bite sleeve off I was still biting on very hard, try as he may I wouldn’t let go! In the end he said, ‘he’s won it, let him take it back to the car’.

The initial course instructor was there, he was impressed with what we have achieved. He said we were at week four of the course already, especially at tracking.

Thank you for asking the following questions, I will answer them as best I can;

Will you get to wear a uniform?
No, I won’t be wearing a uniform. Although I will wear a special harness with Police flashes on both sides for crowd control.

What has been the best part of your training so far?
I have to say I have enjoyed all of my pre-course training. I have to be honest I do love the ‘bite sleeve’ – I think most of the dogs do. On my initial course after a long days training we finish on the ‘sleeve’ so all the dogs end on a high.

Have you met your police handler yet?
Yes, as I mentioned above my handler is called Ed. We have met up three times and we have interacted. I like Ed – he has plans for me in the future.


I would like to thank Tigger for publishing my blog over the past months. I hope you have found my articles interesting and fun. I have to close now as I have to pack all my favourite toys, treats and bedding. Also I have to go to the supermarket to get a large box of tissues!
I’m sure Alison and Stew will let you know when I am licensed.

So, for the final time bye, 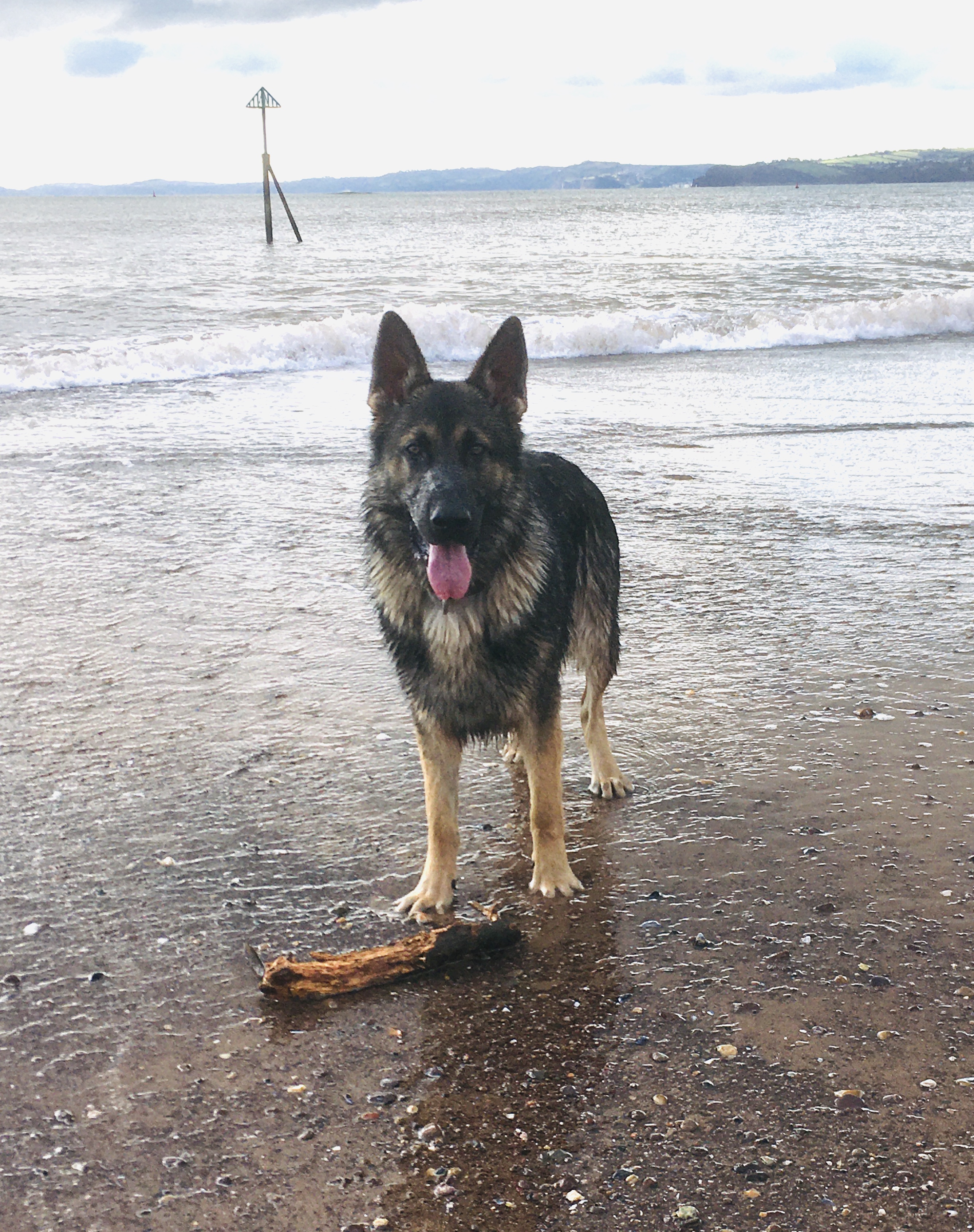