I am now nine months old and weigh 43kgs. My training is ramping up somewhat – I am doing longer training sessions which involves more of the Police work I will be doing when I am a licensed Police Dog. I am now becoming more protective of Stew, if other dogs jump up at him – I see them off! Not nastily though, just a bark and nudge them away from him. I am becoming very strong, I have had Alison over a few times!

As I mentioned in my last canine column some of my puppy group will be attending a big event in Devon – the Devon County Show held in Exeter. Stew and I have been busy practising at Devon and Cornwall Police Headquarters on the thin ramp, the tunnel and it ends with me jumping onto a table. One of the pups wouldn’t jump onto the table so the Canine Development Officer has advised that he has his hips x-rayed as a precaution. 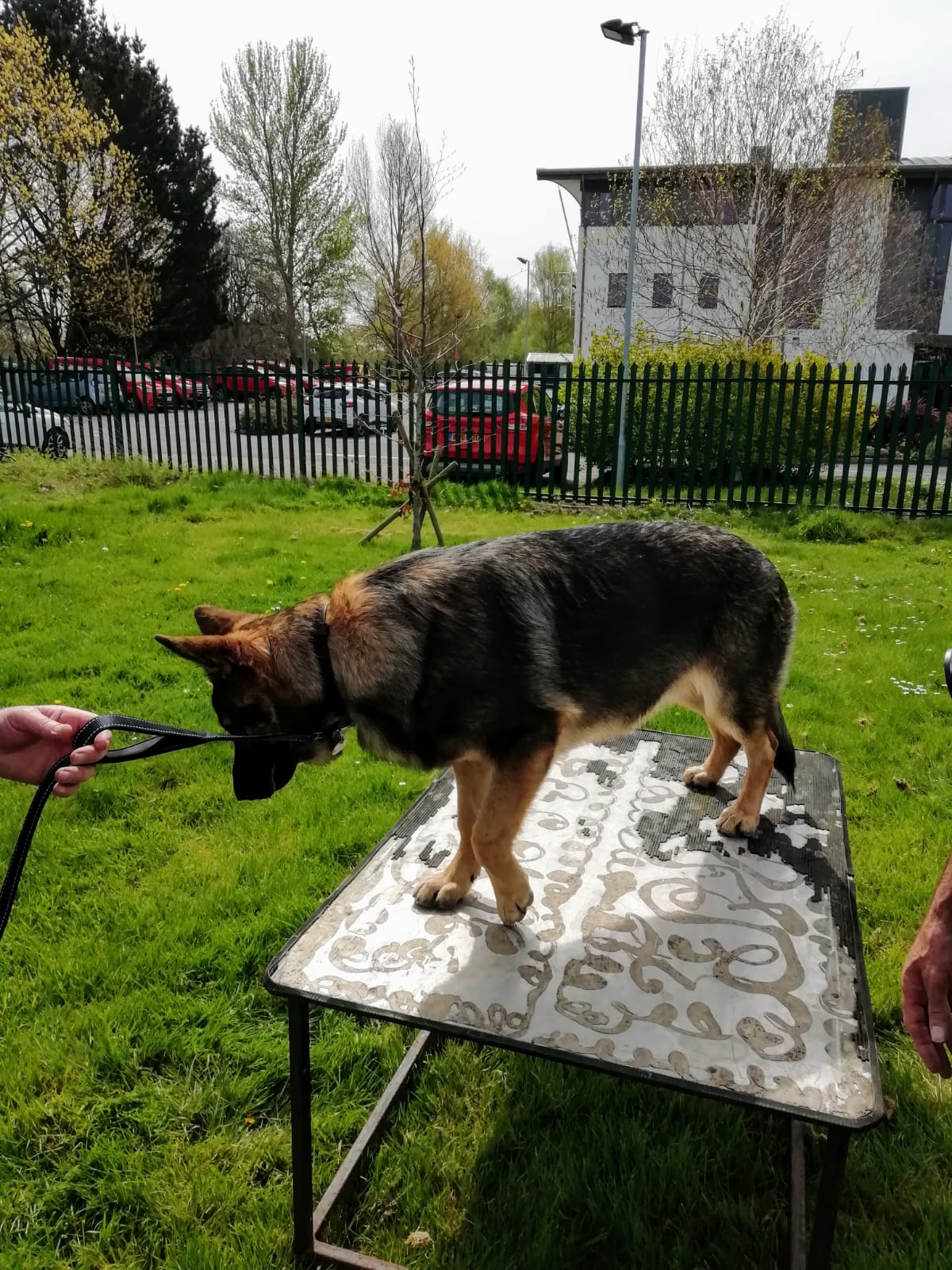 I am still working on my tracking, and I am coming along very well. I was introduced to a pistol being fired. The instructor asks us to play with a toy, he discharges the firearm to see what reaction he gets. If we return to playing with the toy, that is good. Again, whilst playing he fired a second shot, I turned towards the instructor to see what was going on, as he posed no threat to me or Stew I carried on playing with my toy. Stew was very pleased with me.

I also had my first introduction to a Police dog van, I took to it straight away. Here I am in the van, next to me is Ella.

I was waiting in the van with Stew, we were waiting for our turn to do my first building search. The rooms are very untidy, this is simulating the kind of scenarios I will come across when searching. Stew said they were much tidier than the rooms he used to search! The instructor also started to bang some metal filing cabinets to get a reaction out of me, I reacted very well by barking at him, which is what he was looking for. He also hid in a cupboard with a toy – but I found him easily!

A few weeks ago whilst training for the Devon County Show, the instructor noted I was a bit lame in my right back leg, I think I may have banged it earlier that morning at the start of our training session. I had to visit the police vet – I had to go back two days later to have my hips and joints x-rayed. I had to be sedated. When Stew picked me up from the vets he said from the back I looked like Yoda from Star Wars, as my ears were all over the place! Happily I have been given the all clear, which is good news. Alison and Stew were really concerned. I hope I am allowed to do my demonstration at the show.

My puppy walkers were advised not to throw sticks or small balls for me as I could get injured or swallow the ball. Stew said his first GSD, ‘Rick’, loved chasing sticks until one landed at an angle which tore his tongue badly, Rick came through it okay. Since then Stew has never thrown a stick for a dog. However, as you can see I did my own risk assessment and thought that carrying a tree doesn’t come under these restrictions! 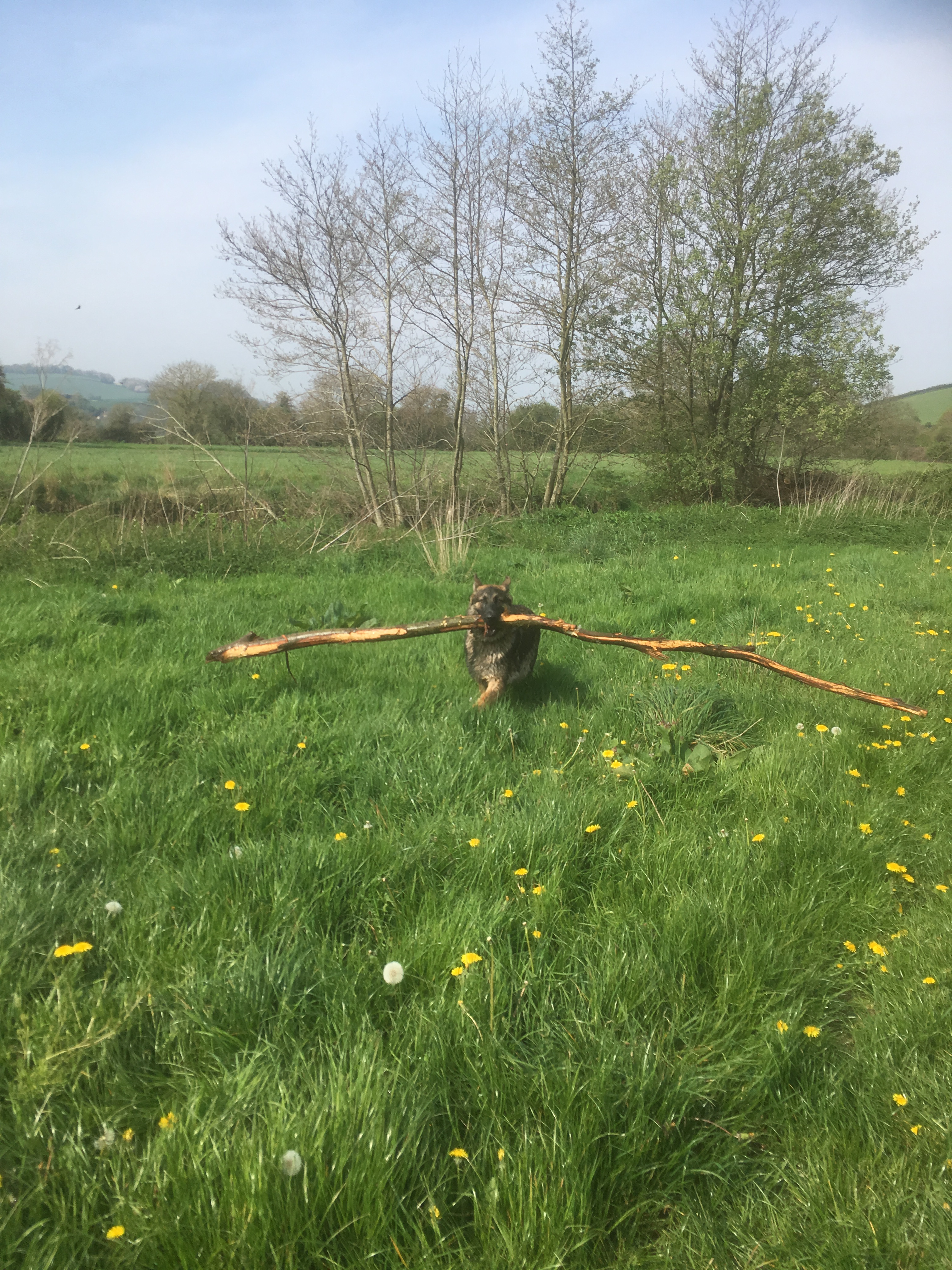