Hello all,
I am now 12 months old, I think I have reached the end of my growing, over the next five or six months I will start to muscle out. I am a very powerful young dog.

Since my last blog I have been on holiday and have had two formal assessments, overall I did really well, apart from one small glitch – but that was soon sorted out. I will explain more below.
Stew and Alison went away for a week’s break, unfortunately as they went abroad I couldn’t go with them. Stew and Alison both missed me and I missed them too, I was really happy to see them both when they came back.
Instead I went to Exmouth, as you know I love swimming in the sea, here is a photo of me swimming in the Exe estuary. 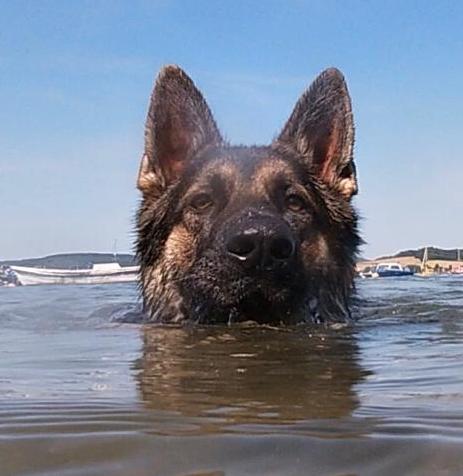 Just when you thought it safe to go back into the water!

My first assessment took place at Exeter racecourse, this involved the ‘spooky man’ scenario, chase and bite on a criminal and a long zig zag track. I was the first dog to do the ‘spooky man’, I had a harness and long line on – Stew doesn’t use the long line when we go for walks as I am off the lead.

We had to walk down a narrow track, when we got near a bush a police officer jumped out! He was wearing a clown mask, a tarpaulin poncho and was carrying bags full of plastic, which made lots of noise. I took one look at him, ran back a few paces then took off! I should have barked at him! Stew recalled me and I came straight back to him, the instructor said this shows that I wasn’t scared of the ‘spooky man’.
He also said when I ran I could hear the long line making a noise behind me, I thought the ‘spooky man’ was chasing me. Stew couldn’t believe it – he thinks I am infallible!

I did the same assessment two days later and I sailed through it – Stew was very relieved.

My second assessment took place at an old country house near Exeter. This is a new test. Again, I was the first dog to be assessed. In the past some dogs have been reluctant to go up and down dark, steep, spiral stairs and enter small spaces, for example toilet cubicles. I had to go through different types of rooms, I had to jump up on desks and tables, I didn’t need any encouragement for this!

Try to get me to jump into the back of the car – that’s a different matter!
The instructors were banging lumps of wood on the tables, throwing plastic dustbins and office chairs around the rooms. An experienced dog handler sat in the corner of one of the rooms to see how I reacted, I went towards him and saw he was no threat and carried on.

None of this fazed me – in fact the canine development officer said I had ‘made his day’.

Here are Stew and I on a very hot day taking five against a hay bale. 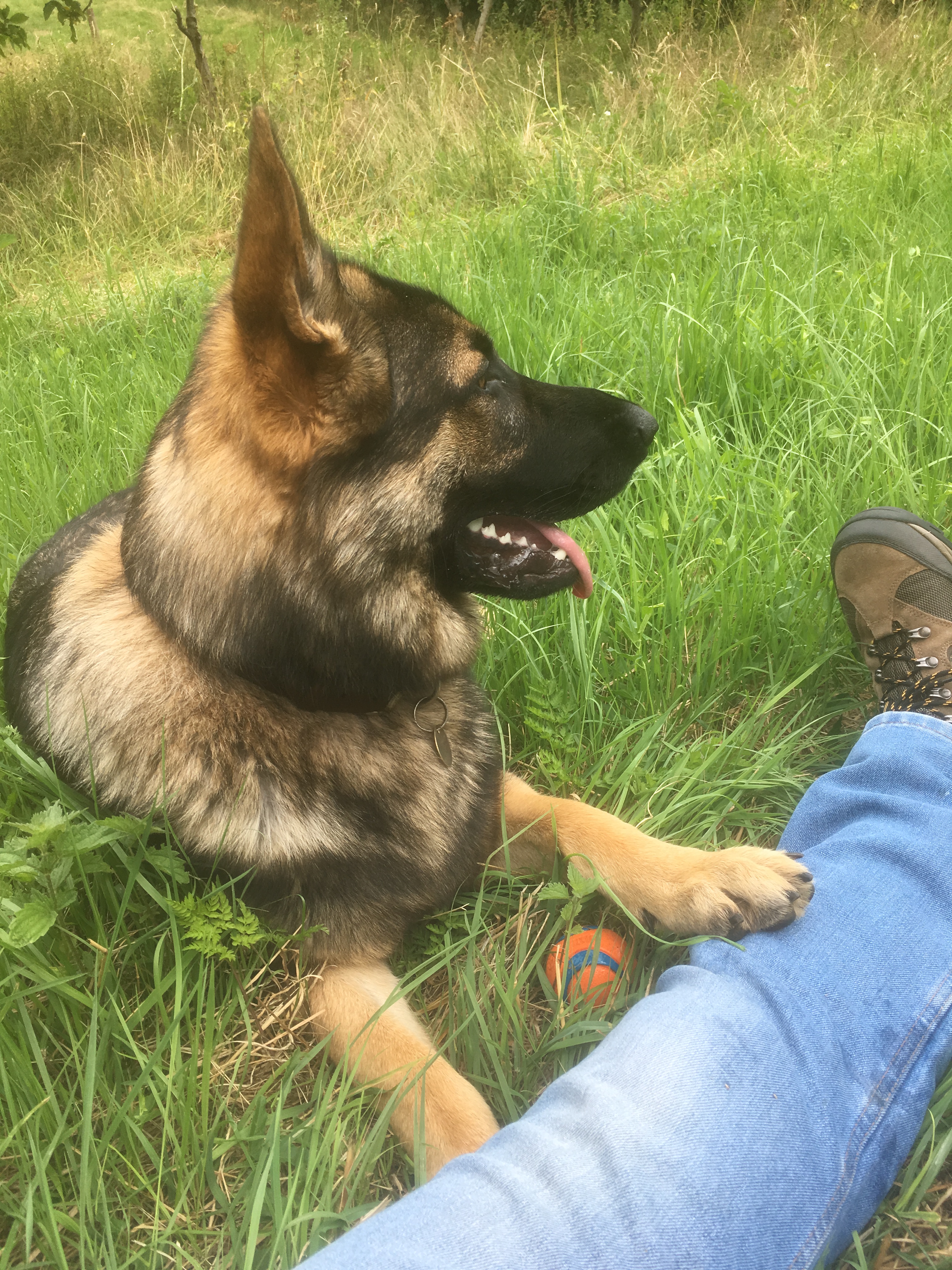 Stew takes me on regular visits to the local primary school and the children and staff are always happy to see me. Here is a nice photo of Stew and I with some of the children. 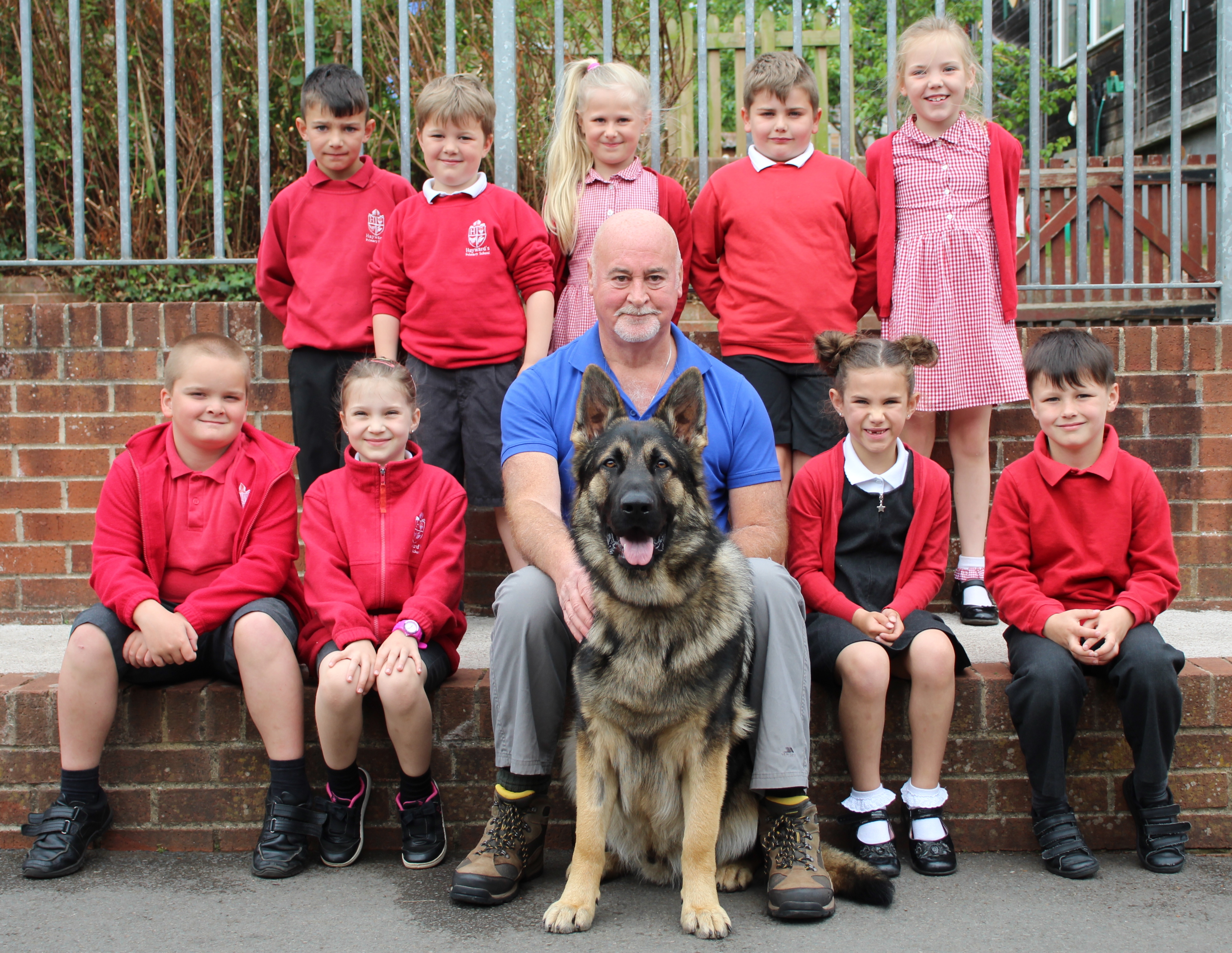 Stew has arranged for a Police dog team to visit the school in the new term, I will report on this in a later blog.

I also had an invite to the ‘Little Puma’s’ martial arts class, they were learning about discipline. A reporter from the local paper came along to do a story and took some photographs.

Here is a photo of me doing something I shouldn’t be doing! Stew calls this my ‘‘It wasn’t me guv honest – I found it this way’’ face. 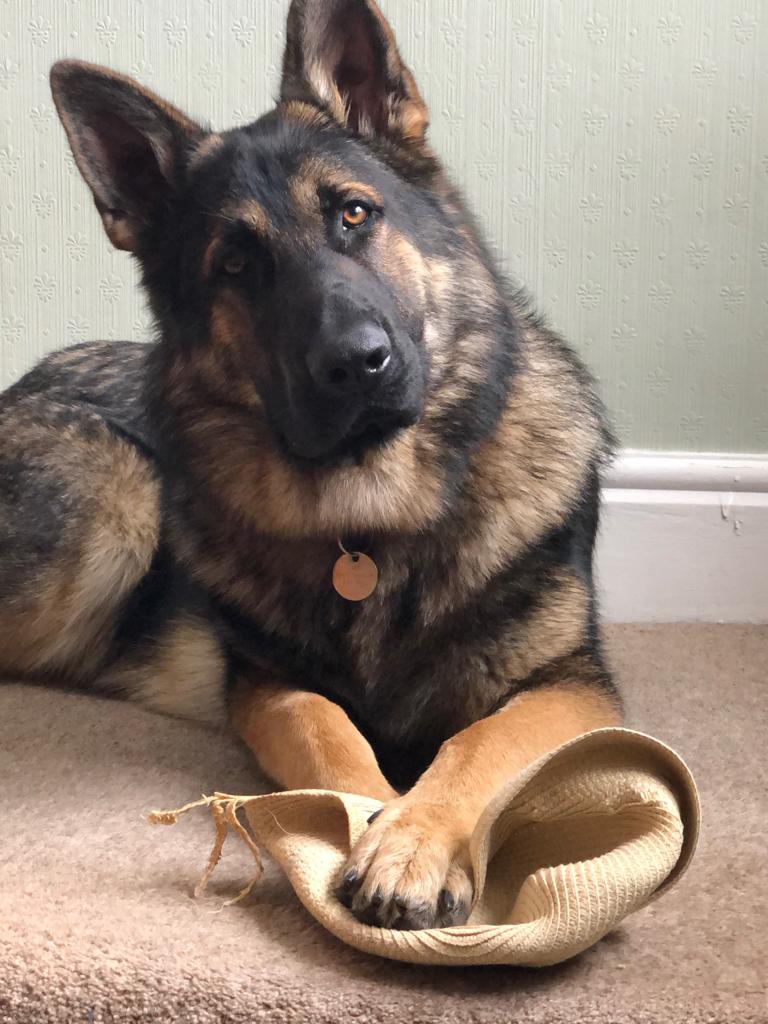 Until next time – bye for now,