I can't believe it, I've only been to Amsterdam pals!
I've always wanted to go as the humans said it's 'fun'. Well it was but I probably enjoyed it for different reasons. We parked over the river so I got to ride a ferry, which was the best, and I got to snooze in a comfy pub. Therefore Amsterdam was fab! What wasn't so nice were the crowds, the rain and the cobbles. The canals were ok I suppose, oh and the history and architecture.

Before Amsterdam we visited two very lovely Dutch villages called Tholen and Strijensas. Both tiny, both pretty and pristine and Tholen complete with a perfect working windmill (which thrilled Elaine!)

There was also real treat for me on the way though, I went to meet some old twitter friends called Diba and Banu. They are deerhounds that live in a lovely part of The Netherlands. It was wonderful to see them and see their sniffing grounds. Diba led the walk showing me the dykes whilst Banu pointed out the cats. Daan just looked out for the local children who love to pet him.

It was about that week that the double storms came in, remember Storm Ciara? Gosh it was windy in the van, 65mph gusts, hail and rain. We had to stay put for a couple of days before creeping up the coast to Volandam, a tourist harbour town. Like all of Dutch towns it's very well kept and pretty, in the summer it's packed but during storm conditions empty! Lots of coloured houses, and of course, a windmill. The Dutch also seem to have very clean windows (as noticed by Elaine, obvs not me)

The Netherlands are full of quaint, dog friendly towns, windmills and cycle lanes. It's very, very nice, very polite and very civilised. In fact the only bad thing we could find about Holland was the motorways, being a small country you never felt far away from one. I would highly recommend it, oh and don't bother asking hostelries if you can enter with a dog.... of course you can! 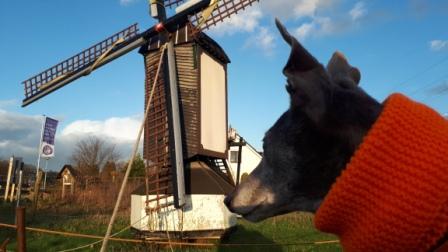