Greetings my roving pals.
This month's 'mooch around a new town took me to Lewes, East Sussex.

Traditionally a market town, it boasts a castle, priory, cobbled streets and timber houses. It is also (mainly) famous for it's dramatic bonfire night but thankfully there are no bangers in the summer.

Based on all of that you'd expect me to love it but sadly pals, I didn't. To it's detriment there is just too much traffic. It's such a shame, within minutes we were pinned against a wall avoiding bus wing mirrors as the pavements narrowed. It was difficult to cross town without playing 'dodge the transit van' and cars criss crossed at speed. Ok the castle looked nice and some cobbled back streets were pretty but by then I was a bag of nerves and on too short a lease for my liking.

Having decided that the priory was probably easier to visit by car we joined the throngs and followed the brown signs. I think someone had moved them as we joined a queue heading out on a dirt track only to three point turn and head back! I am sure the priory is fab if you can find it....

So my intriped pals, when in Sussex let the humans visit Lewes on their own... on a train, on a Sunday or maybe in an evening!

Yours firmly away from the car,
Doz, 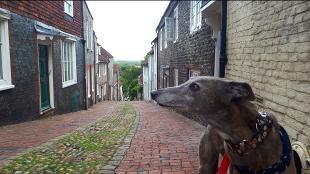