Hi Pals,
Dull old winter means firing up the motorhome and tootling off for a dull old winter abroad! Why we don't just go straight to southern Spain I don't know but we're in Belgium. It's a beautiful, organised county full of cycle paths and animal bridges but it's cold like the UK. In fact the weather in our first two weeks has been pretty dismal. Nevertheless I am a roving reporter so am happy.

We drove straight from home, through the tunnel under the sea and straight across France (a few miles) arriving in Kortrijk by teatime. Or beertime as it's known in our van. Kortrijk is a small city standing on the river Lys, it has medieval towers, cobbled streets and a huge pedestrianised area. A large central square has a bell tower and many bars, including a dog friendly curry house (needless to say my two were very pleased) I really enjoyed my jaunt around especially when locals asked me if I was a greyhound 'like the American buses'! From what I saw, the people of Kortrijk only have golden retrievers.

We initially stayed in Kortrijk for a few days so that we could visit Lille in France. The train was only half an hour and so easy. Obviously it poured with rain but Lille is fabulous. Much larger than we expected but a maze of cobbled old roads and baroque like buildings. It's a really cool place and I would highly recommend for a weekend. Again doggy friendly bars.

Life in Belgium is very civilised and calm, the roads and nights quiet but it was soon time to tootle through to Holland. I've never been to the Netherlands so really looking forward to it.
Clogs and windmills here I come! 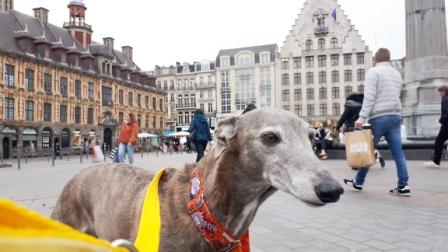