Hello from Scotland or halò as it is on Gaelic Scottish!

This month’s Roving Report is from around Scotland's NC500

We always intended to drive as north as we could around Scotland and the route is now being promoted as the 'North Coast 500'. Essentially five hundred miles of scenic roads through the Highlands and Lochs.

For some reason (blame the humans) we drove the route anticlockwise which, to a dog, is the wrong direction!
From Inverness, Fortrose up to Wick and John O'Groats. Then left along the top towards Cape Wrath and down the west side to Ullapool.
Because we're in a biggish motorhome we drove maybe 350 miles of the full loop avoiding the teeny weeny roads.

The scenery is spectacular, especially in the west. Imagine a Scottish scene, massive hills covered in heather, clear sparkling lochs, castles and stags.
It honestly looks like what you've imagined, however cheesy!
Okay some stretches could be any farmland anywhere and the odd place is bleak but generally it's beautiful.

Elaine spent 10 days staring at the sea for dolphins and the sky for northern lights. Four seals, a couple of dolphins and some lemon streamers in the night sky sufficed.

John O'Groats was amazing to lead walk in although Dunnet is the true north.
I ran on fabulous sand beaches and waved my paw at fellow motorhomers on single track roads.

There were at lot of dogs being chauffeured along the route and they all enjoyed the haggis.

I would recommend it to any hound... just bring a blanket! Love Dozza, heading south x 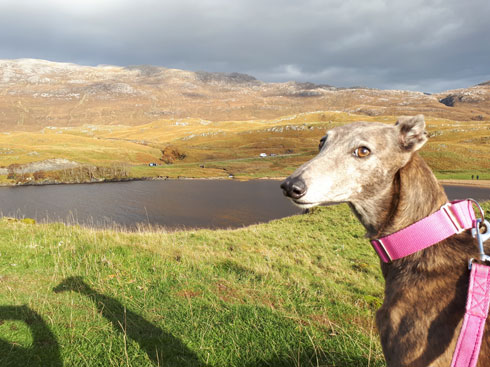