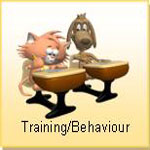 Barking is always a strange subject with humans.
They expect us to be totally silent, yet they bark to other humans all of the time. They call their barks speaking, but it is the same thing.

Why do we bark?
We can bark for loads of different reasons and believe it or not we actually do have different barks for different situations. Humans forget that they have a vast language that they are familiar with and can communicate in depth with other humans. We also have a very in depth range of vocabulary for us to communicate with dogs, other animals and even humans.

If humans took a bit of time to study our barking, they would learn to understand what we are barking at.

Reasons we would bark:
- Fear
- Anger
- Loneliness
- Tiredness
- Hunger
- Play
- Greeting
- Warning
- Communication
- Pain
- Arguing
- Someone at the door
There are loads of other
reasons we bark. These are just the most common ones.

I have taught my humans several of my barks.
They have learnt my barks for:
- Pain
- Anger
- Frustration
- Open the door
- Treat time
- Stranger approaching the house
- Chatting with my friends
- Cat alert
- Arguing
- Play time

There are more but I cannot think of them at the minute.
My humans have been good students and learnt quite quickly.

Should we be allowed to bark?
That would depend of the bark and how long we bark for.
For example my barks are really short, so I rarely get told to be quiet. Although over excited play barks are frowned upon very early in the morning or late at night. BOL!

Dogs should be allowed to express themselves to some degree, but not to the point the whole neighbourhood is sick of hearing them.

Any dog barking should bark for a reason and not just for the sake of hearing their own bark.

With training, for both the human and the dog, an understanding of each dog’s bark should be learnt and either allowed, controlled or stopped.

Can barking be controlled or stopped?
Yes. All dogs should be taught the appropriate time and duration of some barking.
It takes a lot of work for the human to learn about barking and how to control it.

Here are two examples:
A dog barks apparently agitated at the back door.
The human must get up to ‘help’ to find out the reason for the barking. If it was due to something making a noise, such as a plastic bag rustling in the wind, the human should allow the dog to investigate and reassure the dog.

A dog barks excitedly at their human while bringing a toy to them.
The dog is trying to instigate play and is being quite vocal about it. The human must first acknowledge the game and ask for the barking to stop. The human and dog should play for a while until the human tells the dog it is rest time.

I have skipped over a few training points and have assumed the human has learnt these already. If not, it is something that will be fun for both the dog and human to lean together.