I received an emoji poo cushion from Kai whippet at Christmas. After several enjoyable months of playing with it, it has now been Tiggered.

Packaging:
It arrived in Christmas wrapping paper which was great fun to rip off to get to the cushion

Using the Product:
As a well known toy destroyer it was not expected to last more than five minutes but I played with it, carried it around and even used it as a pillow.

Personal Observations:
1. This was a large cushion and had no squeaker inside it (could this be the secret to my mass devastation to toys?)

2. I liked carrying it around for no particular reason other than to carry it.

3. It was just the right size and softness to use as a pillow.

Overall Product Rating:
I have never had a soft toy/cushion of this size before and I found it enjoyable to have, so did not destroy it straight away.

It finally gave up its stuffing on the 4th of July, so just over 6 months Tigger survival rating.

Would I buy the product myself:
Yes I probably would as I really enjoyed playing with this toy. I was quite sad when it had to be thrown out. 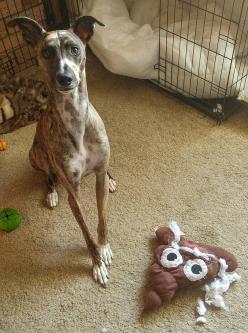