The squizzers are jumping everywhere in the woods on walkies, and there are so many I can’t decide which ones to try and chase first, so I mostly woof at them to let them know that I’m boss.

It’s been quite windy here too, and you know what that means pals...sticks falling from the trees, and lots of them.

Now you may have seen a previous diary entry from me, when I decided that I wanted to rescue The Biggest Stick In The World from the river and play fetch with it. Well folks, what I found a couple of weeks ago makes all my previous acquisitions look like tiny little twigs!

I’m not a hound who is easily intimidated, so when I came across a stick* bigger than me, I had to have it, and woofed at the human to throw it in the river for me to fetch. She was a real spoil sport and just stood and laughed at me as I resorted to chewing it and attempting to drag it into the river myself, but even I couldn’t move it, it was so big!

Folks, I didn’t want to leave it, it was such an amazing stick, look at the picture she took! *The human said it was so big it wasn’t a stick, it was a ‘ginormous tree stump’ but I don’t know those words, so I’ve called it a stick. 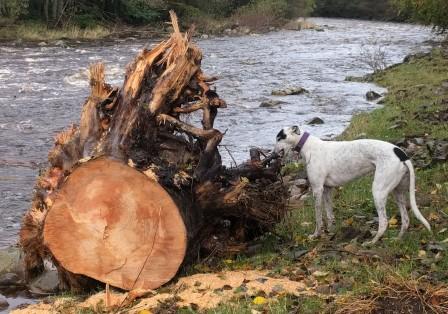