Hi Pals
It’s been a good month so far. The human doesn’t know my exact birthday, so she picked a date for me, which was a couple of weeks ago.
Now I don’t really understand the concept of a birthday, but she came back from the shop with a bag of extra tasty noms, which I immediately tried to claim as mine.
I must be getting old, because she swooped in and intercepted the sausages and bacon before I could grab them.

Well, pals, if anyone knows how to make a pest of themselves, I do. I spent over a day sitting whining by the fridge asking very nicely for the sausages I knew were in there.
I had nearly given up, when the next evening the human spent ages wrapping the sausages up in the bacon.
I was sat dribbling in a totally undignified manner, desperately trying to tell the human that they were very tasty straight from the packet.
But I was made to wait for hours and hours (she tells me it was actually 20 minutes) nearly fainting from hunger where I was lying in front of the oven.
Then, the best part of what I call ‘sausage day’. I got a huge bowl full of pigs in blankets with Yorkshire puddings and mash.
It was inhaled in about 30 seconds, and I didn’t move from the sofa for hours after. 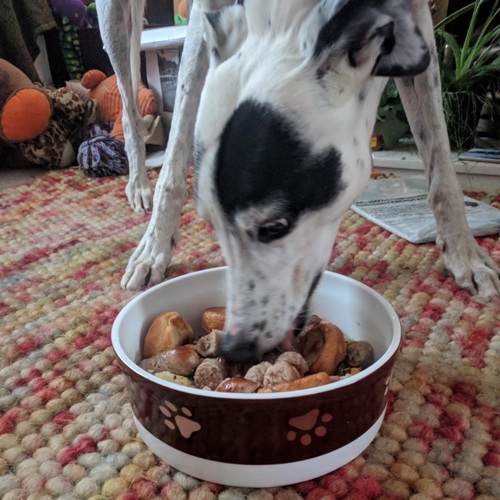