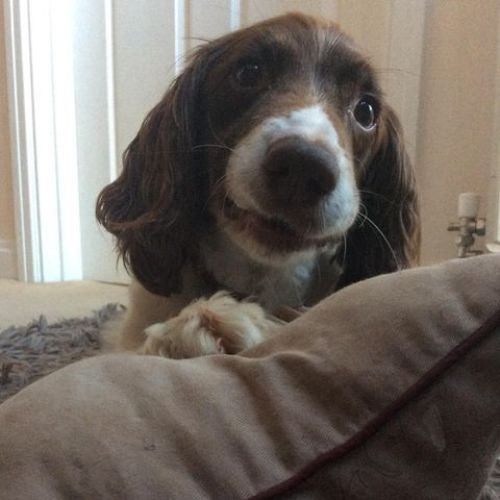 Sparky and I were very saddened to hear of the passing of our good friend Fred Woods on 10th April, he was almost 16 years old.

Fred was an adopted Springer Spaniel from Springer Rescue for Scotland and lived with his mum, dad and fursister Tess, a Cocker Spaniel. Fred affectionately referred to Tess as a Diva, a Minx or Ninja Tess because of her extraordinary skill in stealing food from the most impossible-to-reach places.

We first ‘got to know’ Fred 5-6 years ago when we started following him on Facebook and gradually built up a friendship with him. His daily posts were the highlight of our day; most were funny, revealing his day to day antics and shenanigans. Although I never got to meet Fred in pawson, my late furbrothers Fergus and Monty had that pleasure and I did get to meet Tess once in Warkworth... more on that later.

Fred liked to be ‘helpful’ around his home and garden and kept the latter tidy by ‘clearing away’ stones and plants before bringing them into the house to show his mum his ‘good work’. 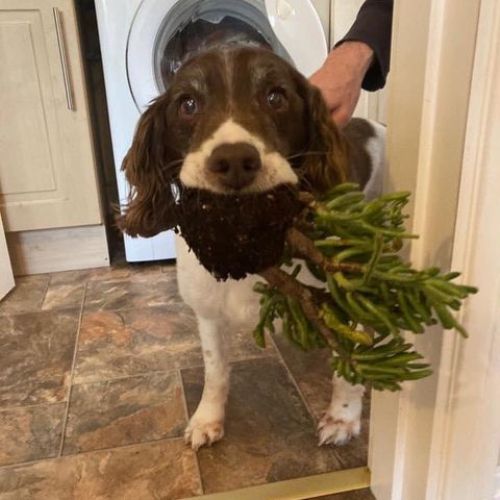 Fred the Shred as he was sometimes called was skilled at, you guessed it....shredding, BOL! Junk mail (in fact all mail), toilet roll, his mum’s knitting patterns, slippers and anything else worthy of his attention all succumbed to his finely honed skills. Tess’s toys, too, often suffered the same fate and had to be kept out of reach. Fred would always deny being responsible and we all thought that the culprit was most likely a pawltergeist. BOL!

He often made fun of his mum’s handmade creations which she brought home from Arts & Crafts classes and he would always refer to the display of them as “the shelves of shame”. BOL!

His mum knits and crochets and once made him a Pom-Pom coat which he unwillingly modelled. The look of shame on his face was amusing to say the least and poor Fred when speaking of his ordeal said “How ridiculous! I feel totally embarrassed and humiliated. I hope no one sees me wearing this!” In the end he had his revenge when Fred the Shred struck again.... BOL!

A keen DIYer Fred could turn his paw to all sorts of jobs from repairing lights to building bedroom furniture and from plumbing work to painting outdoor furniture.

Not only was he a handidog but he was cultured too and would relax by listening to his dad playing the piano (though it may also have had something to do with the “not so secret stash of treats” kept hidden in the room). Every music post had my nosey mum asking what his dad was playing as she too plays the piano.

Since lockdown his dad has been working from home, thus creating a new job opportunity for Fred, as his dad’s PA. His duties included guarding the ‘office’ door so that his dad wasn’t disturbed or taking notes - in other words, ‘stealing’ dad’s notebook, BOL! 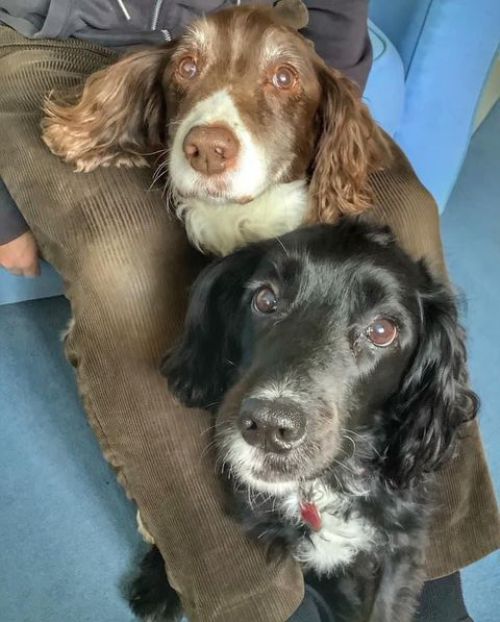 Like all spanners Fred enjoyed his food and would often mention what had been on the menu that day such as fried eggs, bacon, sausages, ninny-nannas, yiggy-yoggy-yoo, liver cake, pompydoms, sardines......the list was endless. Fred celebrated his 6th Gotcha Day in January with a feast fit for a king.

And speaking of kings, Fred even had his own castle; Warkworth Castle and he came to be known as Sir Fred of Warkworth and Tess as Lady Tess Dubois. He kindly named two of its towers Fergus Tower and Montague Tower after my late furbrothers and the other two towers after Sparky and myself. My dad often drives his train past Warkworth and would reassure Fred that his castle was being well looked after in his absence or staff were busy getting it ready for his next visit, BOL.

Warkworth was where Fred hodilayed each year and a visit to the dog friendly Mason’s Arms for fish and chips was always on the agenda as well as a trip to Spurelli’s in Amble for ice cream. It was in the Mason’s Arms that I at last got to meet Tess and her mum, although Tess and I just sat and ignored each other all afternoon whilst our hoomans had a drink and a blether.

Fred’s posts were truly memorable and Facebook hasn’t been the same without him. Here are just a few of my pawsonal favourites:

When Fred had watched a family member on tv compete on University Challenge, he subsequently tried getting a team together to enter “Dogiversity Challenge” but it was a photo of him with his nameplate underneath him that really stuck with us. My mum still has a chuckle when thinking about that one.

In a more recent post a completely innocent photo of Fred looking through a doorway gave us quite a ‘fright’ as we thought it resembled the famous Jack Nicholson scene from The Shining. Fred looked like he was about to say “Here’s Freddy”.

And finally, on St David’s Day, Fred was pictured with a leek and wished his followers “Happy St Dad’s Day”. Poor Fred was confused because his dad is called David.

Thank you Fred for sharing your adventures with us over the years. We always enjoyed reading them and ‘chatting’ to you. You were a part of our lives for nearly six years and I’m sure I speak for all of your followers when saying this, but it really did feel like we were getting to know you, Tess and your mum and dad. You will be greatly missed.

Thank you, too, for being our friend. 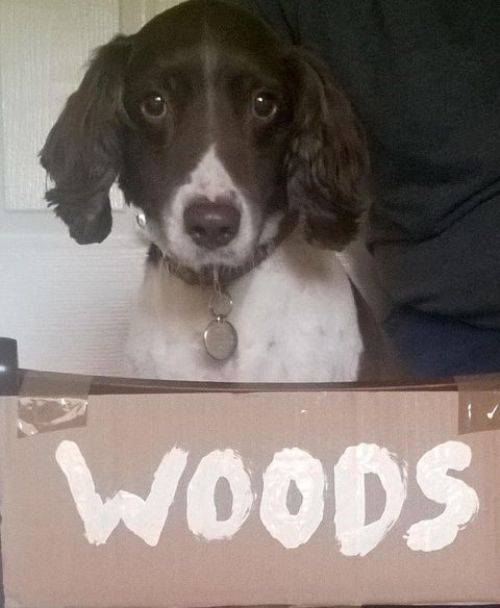