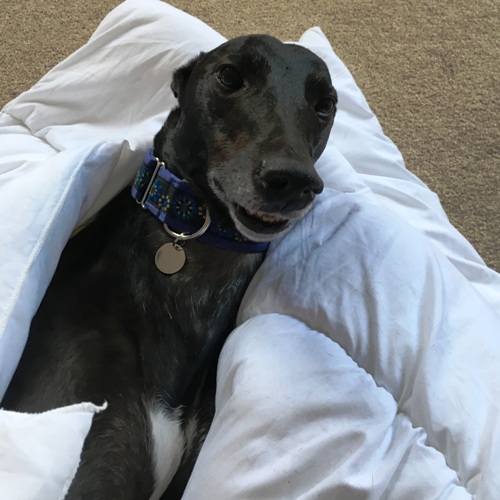 Last night when I went out for my 1.00am wee I was minding my own business over by the fence when, Oh my Days!
I sniffed out a SPIKY!
I have seen a Spiky before at our other house in Wales but never at this house. I was so excited that I decided at the top of my voice to shout to my sister Ellie to say "Spiky, Spiky, Ellie I have found a Spiky!"

Ellie was snoozing so she didn't hear me and I had to shout even louder "Spiky, Spiky, hurry up Ellie Spiky"

Ellie ran out to see Spiky and she decided to shout "Dad, Dad, Dad, Spiky".
When Dad appeared in the garden he said we were both being silly and very noisy.
"It's only a bleedin' Hedgehog you daft pair"

Dad shooed us both back into the house and shut the door and when he opened it again we did a zoomie to see Spiky but he had gone!
I don't know why he went as we were pleased to see him.

When I saw the Neighbour this morning he did give me a right look.
I barked to say "We saw a Spiky last night"
He gave me another funny look.