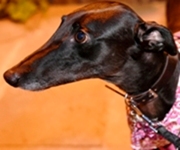 So my friends,yesterday Perry & I were moving house again back to our house in Wales and we were supposed to be going in the middle of the bloomin' night (we were going at 8.00 am Ellie which is a sensible time to go) but Perry, who likes his fluffy bed and @lilymoo_ pyjammies a bit too much, would not get up.

Dad had loaded the Greyhound Limousine but had to leave one seat up to take the luggage so Perry and I had to squeeze
ourselves into a tiny space of four seats and a boot area (has anyone got the phone number for the RSPCA?).

I was being a "Good Girl Ellie" and had my lead attached and was ready to go whilst lazy bones Perry was still doing snoozin' so Dad took me out to the Limousine, let me jump up onto the king sized quilt and fastened my lead to the special "Ellie safety hook". He then left me to my goodself to tip Perry out of his bed.

I lay down for a bit and then my nose started to twitch as I could smell "Chicken". Well it is "Chicken that's not really Chicken" and Mom sings that to me and Perry when we are getting some from the fridge. Here are the words if you want to try it with your Hoomans - "Chicken it's not really Chicken". We normally zoom in when Mom gets to "really". Anyway I could sniff it and I had time to investdogate the shopping bag so I did, and what did I find? ONLY a nearly full pack of it wiv about 40 slices in it!!! It was lovely and I managed to eat it all without touching the kiwi fruit and tomatoes that were on top of the pack.
Clever old Ellie.

Anyway now for the boring bit, Perry got up under protest and got in the limousine and I said "If you were out of bed quicker in a morning you would have got a lovely treat,