History of....
A Dragonfly

Fossils of very large dragonfly are found from 325 million years ago which had wingspans up to about 30 inches.
There are about 3000 species of dragonfly are in the world today.

A dragonfly is an insect and characterized by large compound eyes, two pairs of strong, transparent wings and an elongated body.
Many dragonflies have brilliant metallic colours and an adult dragonfly's eyes have nearly 24,000 cells each.

Dragonflies are predators, both in their nymph stage where they live in water and as adults.
Several years of their lives are spent as nymphs living in fresh water; the adults may be on the wing for just a few days or weeks depending on species.

They are fast, agile fliers, sometimes migrating across oceans, and are often found near water.
They are powerful and agile fliers, capable of moving in any direction, and changing direction suddenly. In flight, the adult dragonfly can propel itself in six directions: upward, downward, forward, back, to left and to right. They have a maximum speed 22–34 mph with average cruising speed of about 10 mph.

Dragonfly eggs are laid inside plant tissues are usually shaped like grains of rice but the size of a pinhead. A clutch may have as many as 1500 eggs, and they take about a week to hatch into aquatic nymphs who moult between six and 15 times as they grow. Most of a dragonfly's life is spent as a nymph, beneath the water's surface. Where they eat any animal that is smaller than themselves.
When the nymph is ready to metamorphose into an adult, it stops feeding and makes its way to the surface, generally at night.
It remains stationary with its head out of the water, while its respiration system adapts to breathing air, then climbs up a reed or emergent plant, and moults.
Anchoring itself firmly in a vertical position with its claws, its skin begins to split at a weak spot behind the head.
The adult dragonfly crawls out of its larval skin, arching backwards when all but the tip of its abdomen is free, to allow its exoskeleton to harden.
Curling back upwards, it completes its emergence, swallowing air, which plumps out its body.

Dragonflies are used in traditional medicine in Japan and China, and caught for food in Indonesia. They are symbols of courage, strength, and happiness in Japan, but seen as sinister in European folklore. 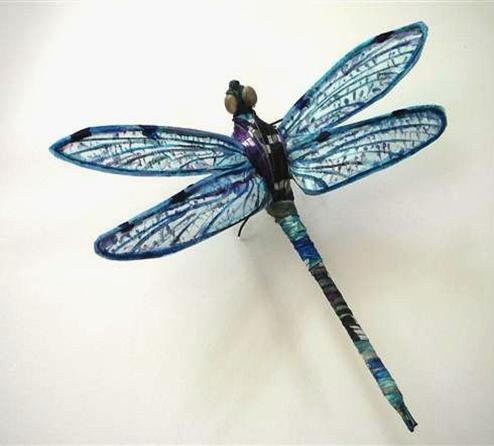