Reindeer were particularly abundant in the Magdalenian deposits just before the end of the Ice Age. At that time and at the early Mesolithic it was the game animal for many tribes. The supply began to get low during the Mesolithic, when reindeers retired to the north.
Reindeer are also known as caribou in North America.

The name rein is of Norse originhreinn, which means horned animal.
The word deer was Old English, dēor, meant a wild animal of any kind.
The name caribou was French, qalipu, meaning snow shoveller, referring to its habit of pawing through the snow for food.

The reindeer is the only domesticated deer in the world and was the last animal to be domesticated, though it may be more accurate to consider reindeer as semi-domesticated.

In the largest subspecies, the antlers of large males can range up to 39 inches in width and 53 inches in length. The point of their antlers reflects the nutritional status of the reindeer and climate variation of its environment. The number of points on male reindeer increased from birth to five-years of age and remained relatively constant from then on.

Pelt
The colour of the pelt (fur) varies considerably, both between individuals and depending on season and regions. Northern populations, which usually are relatively small, are whiter, while southern populations, which typically are relatively large, are darker. The coat has two layers of fur. A dense woolly undercoat and longer-haired overcoat consisting of hollow, air-filled hairs. Fur is used to regulate their core body temperature in relation to their environment.

Heat exchange
Blood moving into the legs is cooled by blood returning to the body to minimize heat loss through the skin's surface, maintaining the core body temperature.
Reindeer have specialised noses that warms incoming air before entering the lungs, and water is saved while the reindeer's breath is exhaled, and used to moisten dry incoming air.

Hooves
The reindeer have large feet, each with four toes, two crescent shaped hooves and two small dew claws.
Reindeer hooves adapt to the seasons. In the summer, when the ground  is soft and wet, the footpads become sponge-like and provide extra traction. In the winter, the pads shrink and tighten, exposing the rim of the hoof, which cuts into the ice and crusted snow to keep it from slipping and enables them to dig through the snow to the moss.

Clicking sound
The knees of many species of reindeer are adapted to produce a clicking sound as they walk, which can be heard from about ten metres away. The sounds originate in the tendons of the knees, providing an exceptional example of non-vocal acoustic communication in mammals as the sound differs in different sized and ranked reindeer.

Eyes
Reindeer can see light in the ultraviolet range. It is thought that this ability helps them to survive in the Arctic, because many objects that blend into the landscape, such as urine and fur, produce sharp contrasts in ultraviolet. Arctic reindeer eyes change colour through the seasons, from gold through to blue to help them better detect predators.

Food
Reindeer have a four-chambered stomach. They mainly eat lichen (moss) in Winter and are the only large mammal able to eat it due to specialized bacteria in their gut. They also eat the leaves of willows and birches, as well as sedges and grasses. They have been known to eat their own fallen antlers, probably for calcium. There is some evidence to show in Spring they will also feed on small rodents, fish and bird eggs.

Migration
Some populations migrate up to 3,000 miles a year, and covering 400,000 sq miles.
Normally travelling about 12 - 34 miles a day and run at speeds of 37–50 mph. During the spring migration, smaller herds will group together to form larger herds of 50,000 to 500,000 animals, but during autumn migrations the groups become smaller as the reindeer begin to mate. During winter, reindeer travel to forested areas to forage under the snow. By spring, groups leave their winter grounds to go to the calving grounds. A reindeer can swim easily and quickly, normally at about 4 mph but if necessary at 6 mph, and migrating herds will not hesitate to swim across a large lake or broad river.

Predators
Golden eagles prey on calves and are the most prolific hunter on calving grounds. Other known predators are wolverines, brown bear, polar bear, grey wolf and grizzly bear.

Folklore
According to folklore Santa’s sleigh is pulled by flying reindeer. These reindeer were first named in the 1823 poem called A Visit from St. Nicholas, where they are called Dasher, Dancer, Prancer, Vixen, Comet, Cupid, Dunder, and Blixem.
Dunder was later changed to Donder and then to Donner (German for thunder), and Blixem was later changed to Bliksem, then Blitzen (German for lightning).
Some consider Rudolph as part of the group as well, though he was not part of the original named reindeer. Rudolph was added by Robert L. May in a book he wrote in 1939 called Rudolph the Red-Nosed Reindeer. 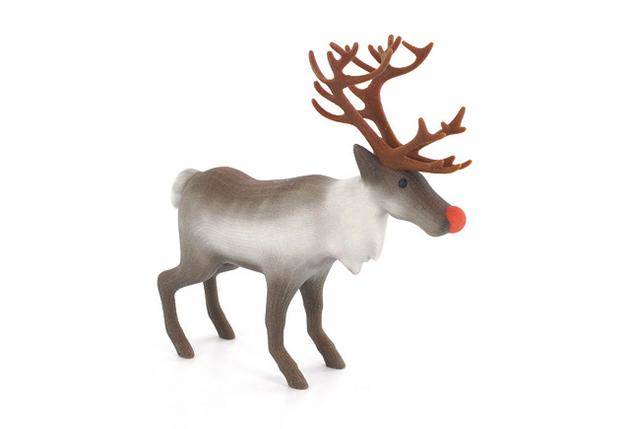 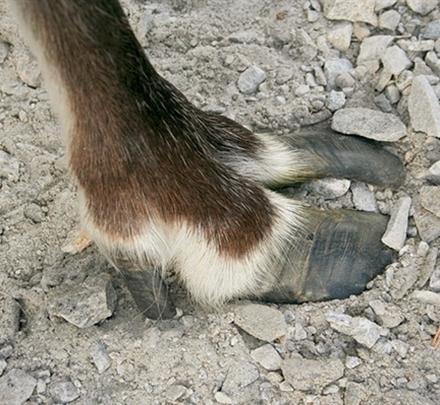