Hey pals,
Well we're months into our lock down so I hope everyone is well and not too bored of walks around the block. Having said that we've been allowed on further walks and car journeys recently. I have managed to catch up with a few friends in the park. My good friends Willow and Flynn live in the countryside so I met them in the field for a good old bark, we were super excited. I've also had my first barbeque on the beach with a couple of friends, two metres between sausages!

Elaine had been very busy over the last few weeks. She helps at a homeless charity so has been looking after vulnerable people and their doggies too. Many dogs live on the streets in Brighton and we have Streetvet always looking after them. During the lockdown Elaine helped sort their food donations and was often seen driving around town with emergency cones of shame and dog treats! I'm pleased to report that all our street dogs are fine and healthy. Elaine's particular favourite is a dark staffy called Buddy, he's the friendliest, waggiest boy apparently. I'm not allowed to meet any of the dogs because I am badly mannered.... how rude is that pals?! I am reduced to sniffing Elaine's jeans when she returns.

The homeless charity have helped hundreds of people and their pets over the last few months, including cats.... which brings me onto my final word. Bob the street cat, wasn't he a legend? I was very sad to see that he had died and I'm sure James will miss him terribly.

Doris, lucky to have a roof over her head, the lurcher x 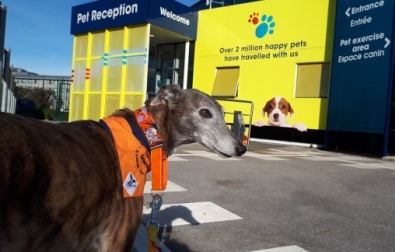